Puns are the lowest form of humor, but I couldn’t resist after seeing what KFC named their NOT-Ultra Magnus:)

Recently I started reading a lot of the IDW series of Transformers Comics. I got absolutely hooked! MORE THAN MEETS THE EYE has the most interesting, action packed, character-based, comedic Transformers story yet, in my 30 years of being a fan. And LAST STAND OF THE WRECKERS was one of the coolest, goriest series in Transformers yet! 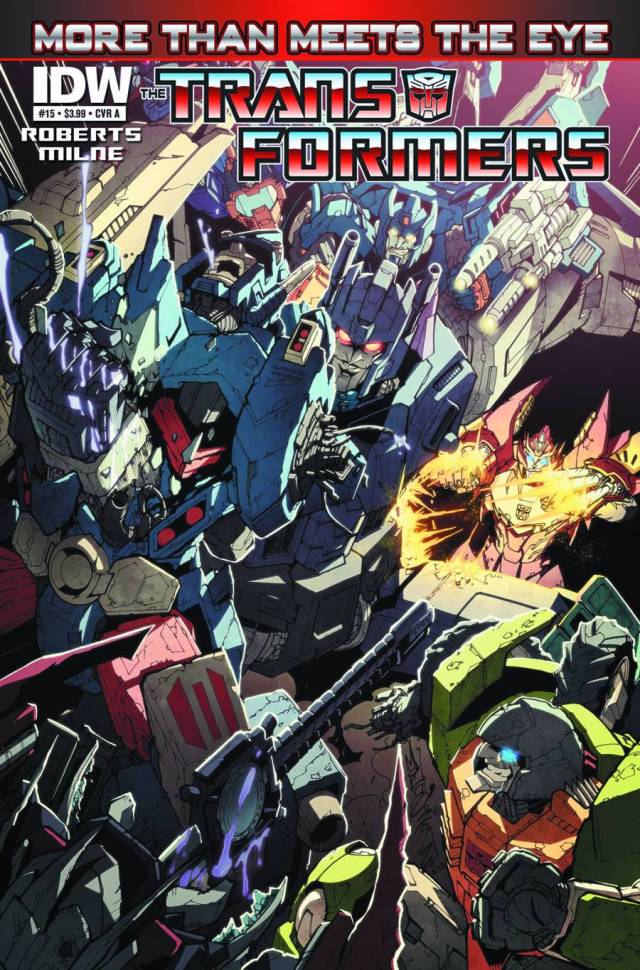 I immediately went to get all of the IDW More than Meets the Eyes characters ++ if they actually were the IDW versions (e.g. Tailgate who I’ve reviewed before). However one character eluded me – with no real classics version available – OVERLORD.

IDW Overlord has to be my favorite Transformers villain ever. Because he actually has a personality! So I had to get a toy of him – even if it means making my own. I went online and saw what other people had done, but I wasn’t satisfied with the scale of the base molds chosen, or the aesthetics. But I finally found one I was satisfied with…

Cybertron Dirge (Voyager)! It seemed about the size I was going for and was sufficiently bulky. It also helps that most of him was the right color already. Here is my mostly completed product in alt mode. I say mostly complete because I can still make it better.

Note the Tank looks pretty good if I say so myself for just being a pair of legs and a gun. However it pretty much Parts Forms to the extreme like legos. I have to work out how to integrate the tank treads into robot mode lol. 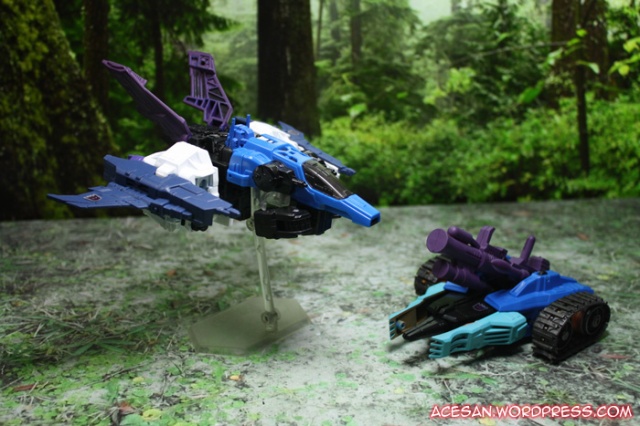 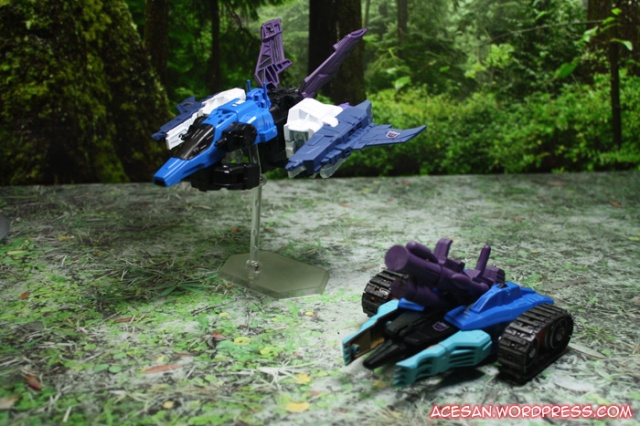 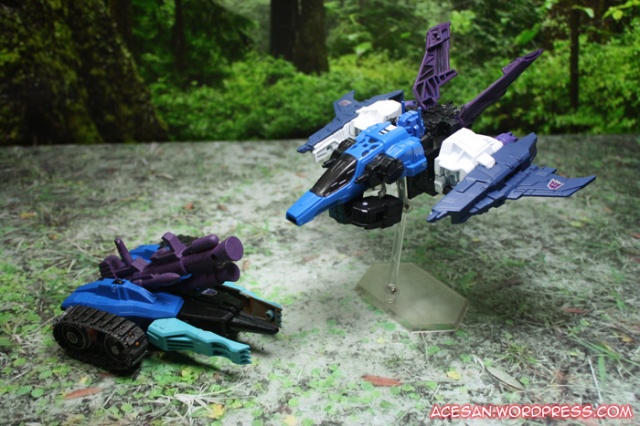 And here is robot mode. I admit, not 100% accurate to the IDW source material (the jet cockpit is supposed to be on his left arm) but for me it’s close enough. It’s classics after all (yeah I know, excuses lol). 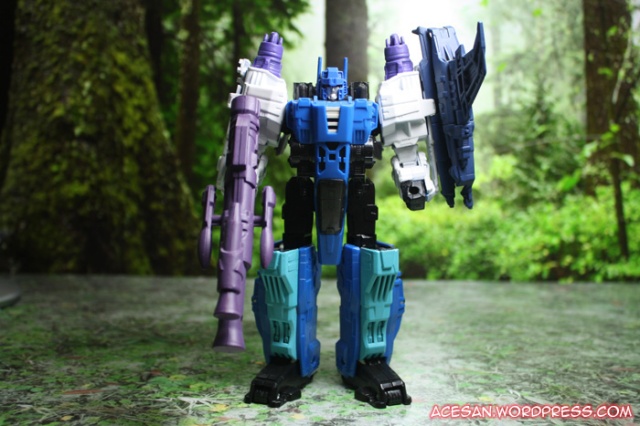 Gun was taken from some knock-off robot transformer I found at Megamall. I think it was a basketball that turned into a robot. Pretty cool. I thought the gun would look good for Overlord painted purple, and yes it does! 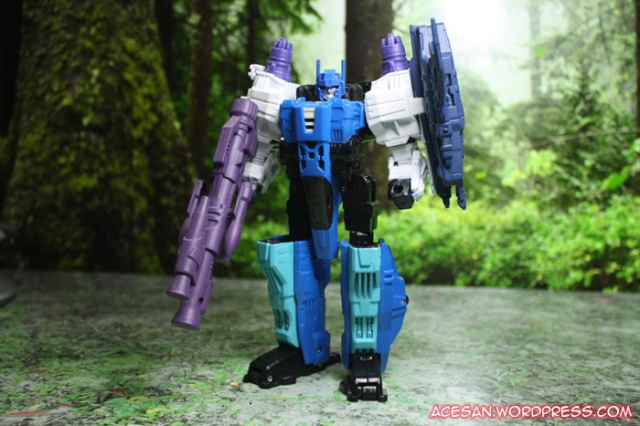 Antenna is made from 2 metal pins I pulled apart from another knock off that I was using for parts. It’s pretty much Dirge’s head though, just painted his face silver and carved the sides of his head to glue the antenna.

Overlord VS some of my IDW crew. 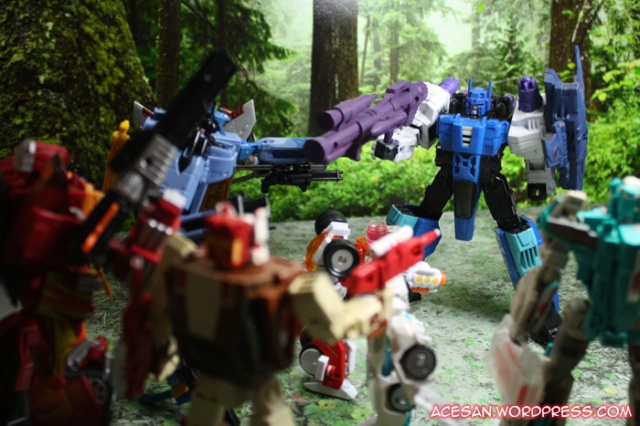 Need IDW versions of Rodimus, Whirl, Chromedome, Brainstorm. Maketoys Trashtalk pretty much kills it for Swerve. The others are fillers for now, though pretty awesome fillers. 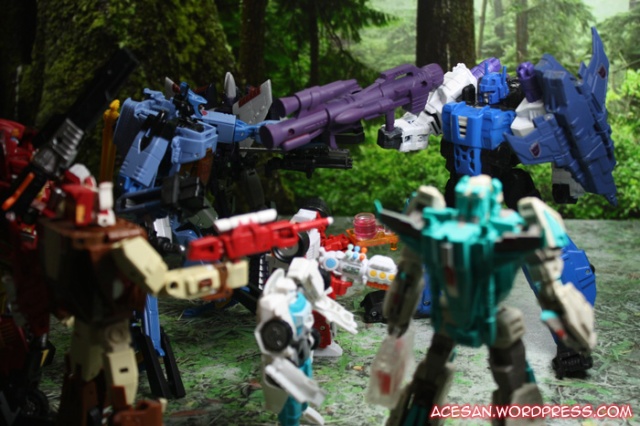 Fort Max gets his revenge?

Have to admit I’m happy with how this guy turned out. Just need to integrate the tank treads into transforming into his legs.

The below would make a good story!

Anyways hope you enjoyed, and if you like Transformers and haven’t read the IDW series “Last Stand of the Wreckers” and “More than Meets the Eye,” go out there and get them now! (or purchase online!).

Thought I’d review Tailgate’s wave mate while I’m here seeing as how these guys haven’t really showed up anywhere else except the Philippines?

Anyway, Transformers Generations “Skrapnel and Reflector”. I prefer Shrapnel, who the hell thought of changing his name?!

What it says on the back of the box: REFLECTOR and SKRAPNEL are always on the lookout. Reflector uses his lens to steal Autobot secrets from long range. The insecticon Skrapnel is also on the lookout… searching for the next victim of his supercharged electric current blasts.

Anyway here they are. Don’t mind what looks like Skrapnel’s black face. He actually has silver paint there, but it doesn’t really come out in my pics. 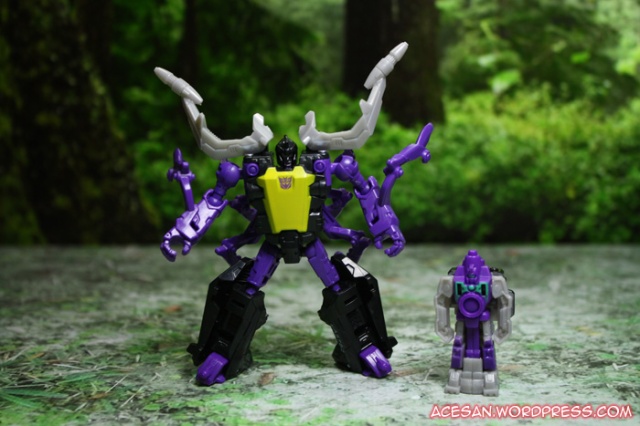 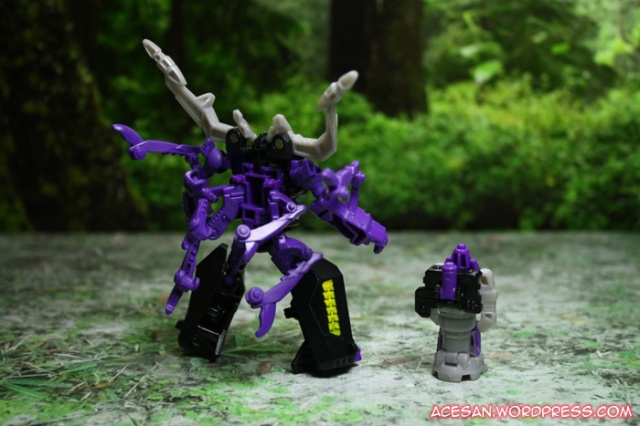 Pew Pew on G1 version of “Shrapnel” who I think is still superior to this new version. Can’t beat die cast and chrome! I’ll take those over the articulation in this case. 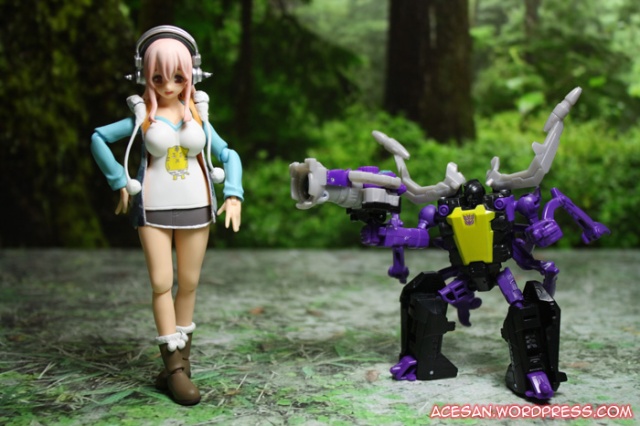 Insect Mode. I actually don’t know what kind of insect it is – some sort of horned beetle? The transformation is actually a bit involved. I’m ashamed to say I had to look at the instructions to make sure I was doing it right.

Not too bad. I felt like I was stressing the plastic insect legs when folding them however.

Compared to G1. The only thing I like better is the legs compared to the wheels. 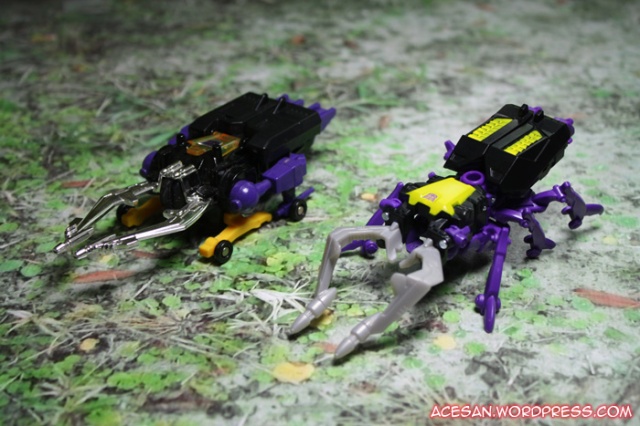 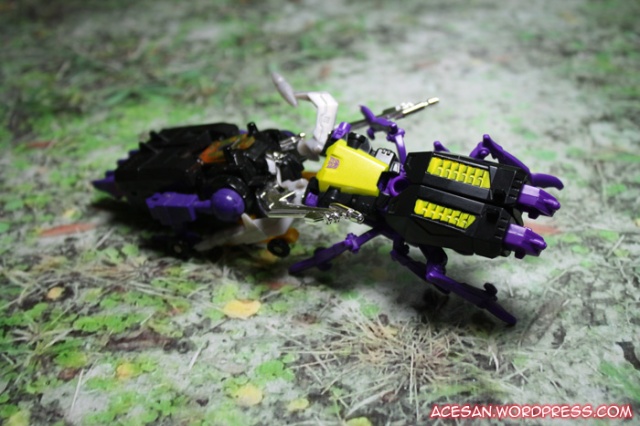 Hmm. I think I’ll leave it here… anyway, not too great an update on the G1 I think. Worth getting if you like the Reflector, but I’d say Skrapnel himself is pretty average.

Walked into Toys R Us Powerplant Mall on a whim yesterday after getting a haircut and spotted this little fella! Transformers Generations IDW Tailgate (and Groundbuster but who cares about him…) 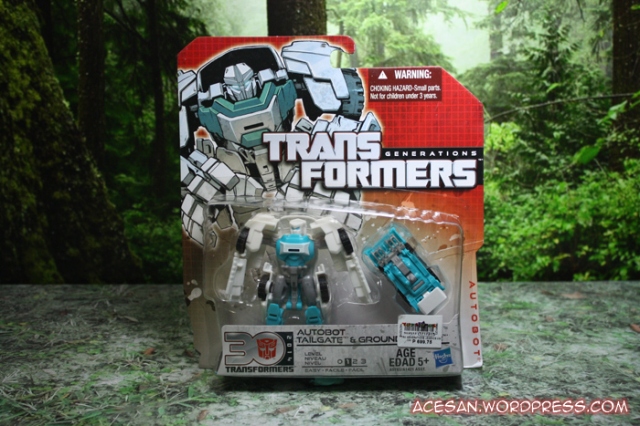 I’ve been quite addicted to the IDW series of “More Than Meets the Eye” lately and I have to admit it is the BEST Transformers comics series yet – coming from a longterm fan. James Roberts (the writer) is an absolute legend. Also love Alex Milne’s art, very “Anime” and Transformers at the same time.

Anyway, Tailgate here is one of the “Lost Light” crew members when Rodimus takes off into space on a Quest to find the Knights of Cybertron. Whatever that is. Anyway the premise of the story takes a back seat to character development that you wouldn’t believe a robot could have – and comedy too.

Tailgate here was actually millions of years buried underground until the crew find him just before takeoff in issue 1. Anyway I won’t spoil the story, however Tailgate does become one of the favorite characters of the series, kind of like a mascot.

Matches the comic design quite well!

Hmm, I wonder what he transforms into? 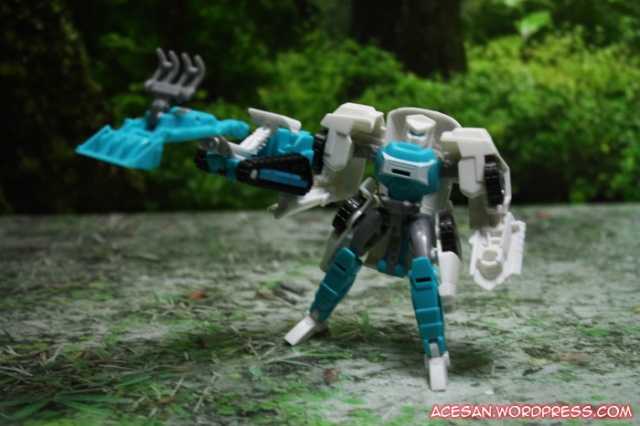 Throwaway target master weapon thingy. Not accurate to the comics so people probably won’t care about it.

Spots car mode. No, not cybertronian like the comic unforunately.

Again not found in the comics…

Comparison to his old self in robot mode. 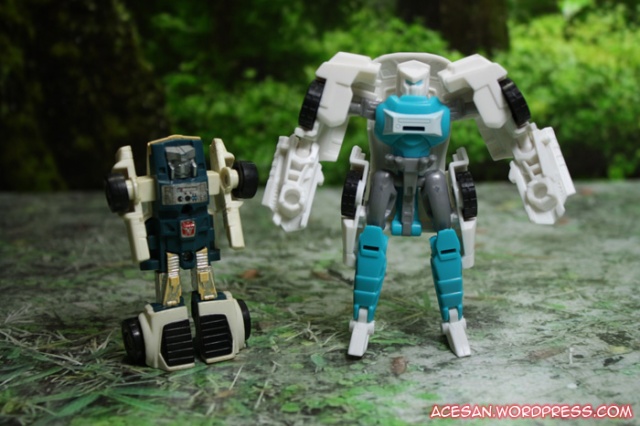 Awww, aren’t they the couple! 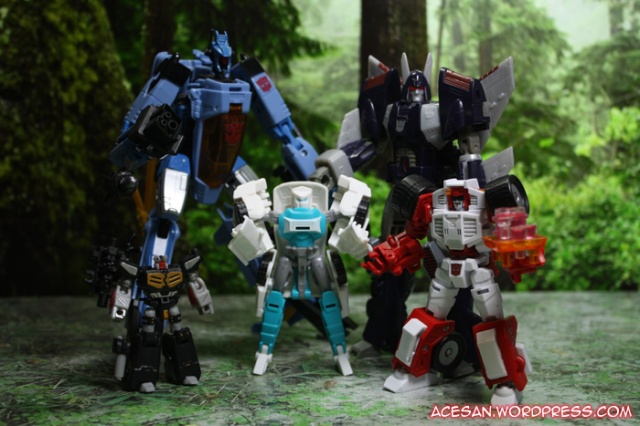 All up a cool little bot and glad he came out here in the Phils early! Need more IDW More than Meets the Eye!!!

Head Articulation right. Not that much, but it’s something? 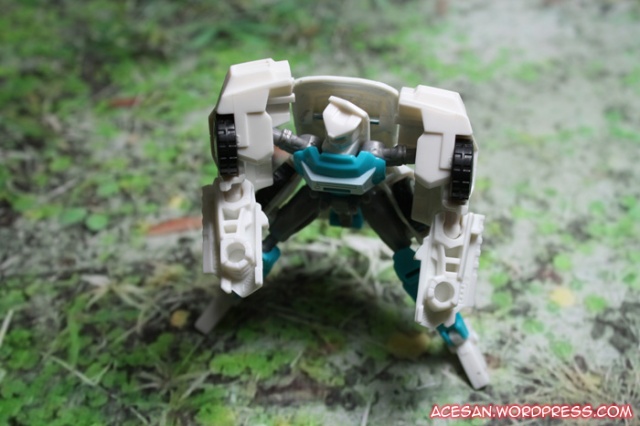 With Targetmaster partner in “robot” mode, Groundbuster. Yes, you just sort of sit the tank up on its butt.

Lay it down flat and you get bulldozer mode. It pretty much transforms like a Matchbox car!

He does make a good Driver for Fansproject Revolver (Roadbuster)? 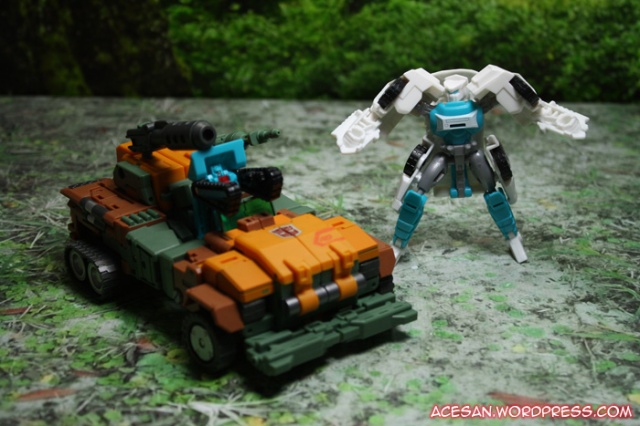 This cover inspires the below:

Not like Rodimus is some hero in the comic though! I actually find him pretty useless. Anyways, till next time!

Finally, after a year of collecting these figures, I now have the set, behold – The Stunticons!!! Err … or should I say Fansproject Casuality Military Motorforce… 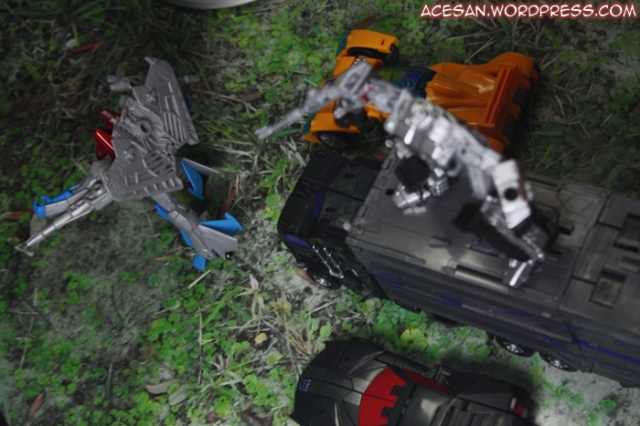 The Stunticons were my favorite combiner group back in the day; if they didn’t get nerfed, their personal forcefields and anti-gravity generators were pretty damn overpowered.

And then of course, there’s this guy:

Yes Whirl, you are … (My Whirl custom – made from Generations Springer and the Headrobots Drone upgrade kit). Love this guy in the IDW More than meets the eye comics.

Also got this guy – Planet X Caelus (sp?). AKA Fall of Cybertron Swoop. And I haven’t opened him yet, but I did also get Perfect Effect’s Warden “Fortress Maximus.” When I open it, I’ll post some pics. I’m so addicted to Third Party Transformers!!!

And now, one last pic… 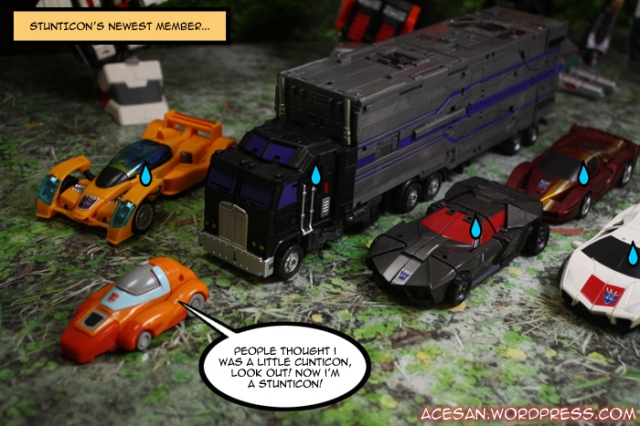 I always found it weird how Predaking was supposed to be the ultimate fighting machine, and yet he got beaten by Sky Lynx, Wheelie and a Human on his debut episode in G1 >_>.

I mean, check this out:

The closest thing to a perfect fighting machine the Decepticons have. As a warrior he has no equal; as a weapon he has no restraints. His actions result from seemingly savage, animal instinct. Can lift 500 tons; reacts to any movement he sees within .002 seconds. Can generate protective electric field. Weilds powerful x-ray laser cannon. Each foot houses twin mortar shell launchers. No known weaknesses.

Now that’s probably the most epic description of any Transformer ever … and yet in every episode he appeared in he got his ass whooped!

It’s a pity that his on screen performance never matched his bio; maybe he got intimidated by all the expectations placed on him and it messed with his mind…

Anyways, I recently got the last member of the Unique Toys NOT-Predaking, known as “Warlord” and in this case, the gestalt really does end up more than the sum of it’s parts. 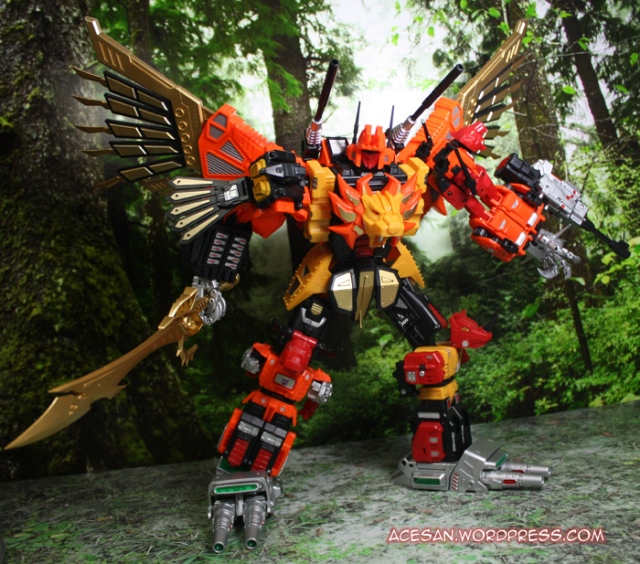 Now that is beautiful…

Usually, third party Transformers end up as being a “re-imagined” version of the character, however in this case UT simply just took the original design and gave it more articulation, and way better proportions.

Of course, UT did “cheat” a little by parts forming the waist, hips, head, feet, hands and the large wings, but in this case I’m glad I did because it makes the best proportioned NOT-Predaking out there in my opinion.

Sharpclaw, AKA NOT-Razorclaw is also 1.5 times as large as his team mates, which is also kind of cheating as he is meant to be the same size. 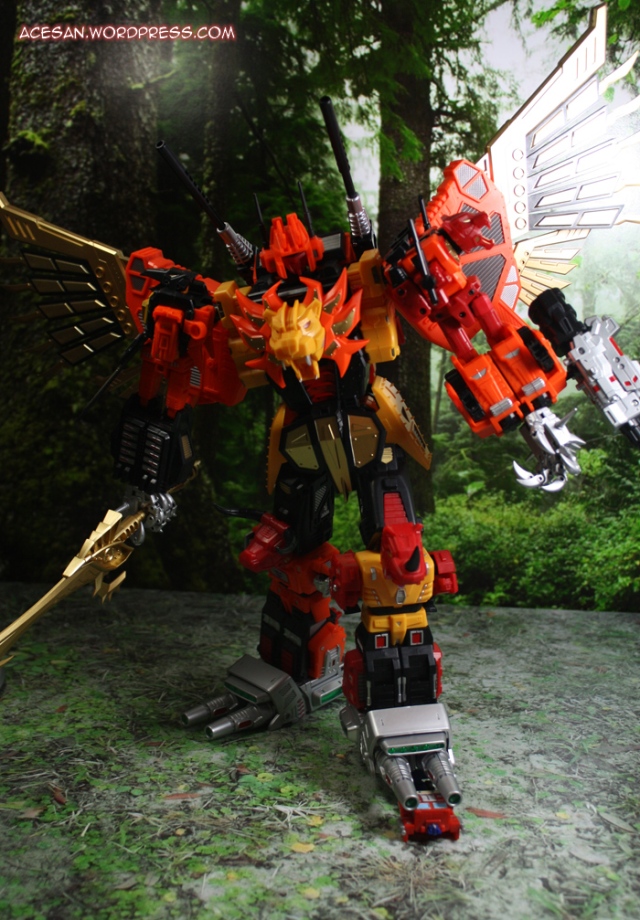 I took a chance on UT Warhawk almost a year ago, and now that I have the set, I am glad I got him. However I am also getting Mastermind Creations Feralrex, which also looks extremely cool, and that will be my “Classics” Predaking as opposed to “G1.”

T close, I do highly recommend UT Warlord NOT-Predaking, and I think I give it 9/10 for combined mode, and probably a 7/10 for the non-combined mode.

My 2nd Custom – another black prime – Laser Prime Scourge and Maketoys Battletanker. Rather than pay a fortune for the collector club one, I just made my own 🙂 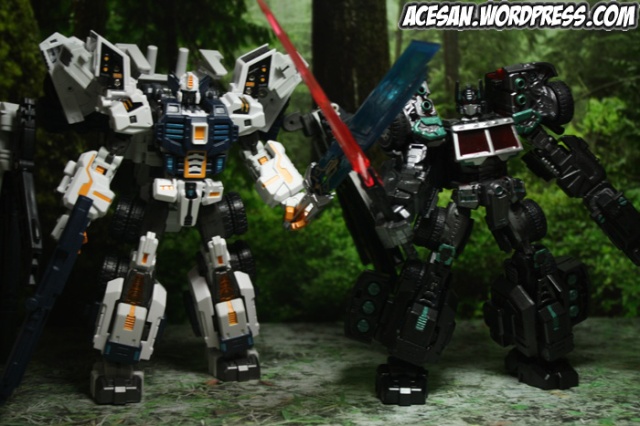 Some pics of my latest toys 🙂 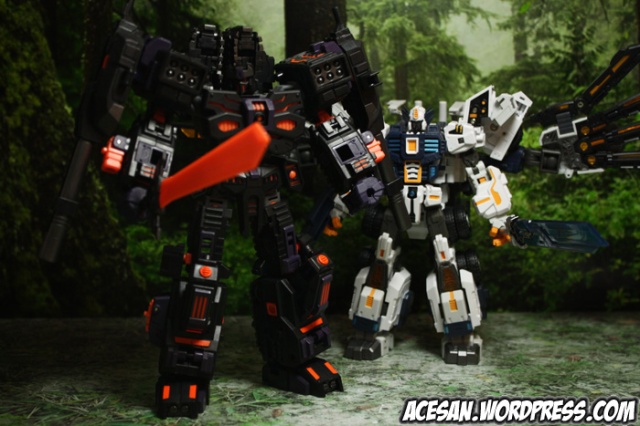 Spoiler for my Photofic? (yes I’m still working on it!) 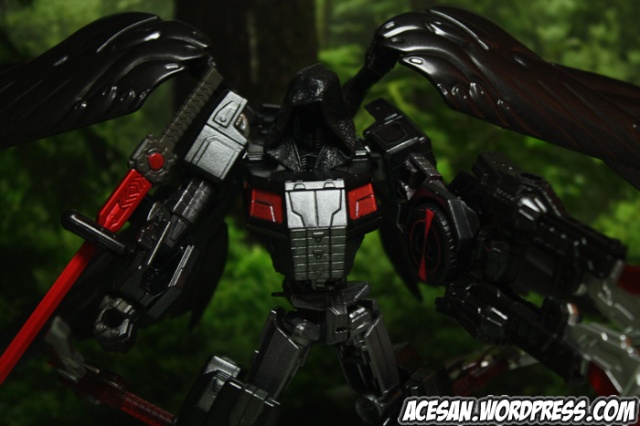 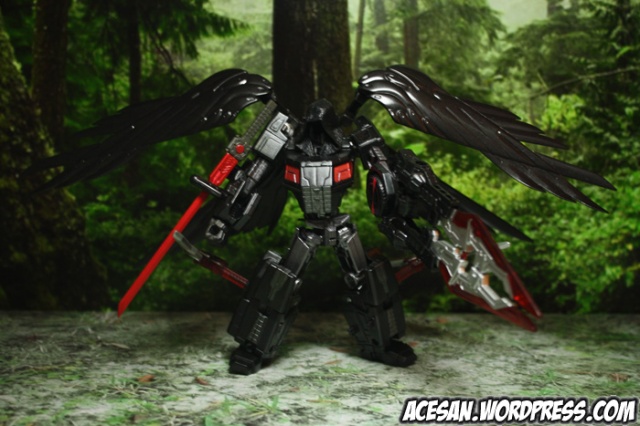 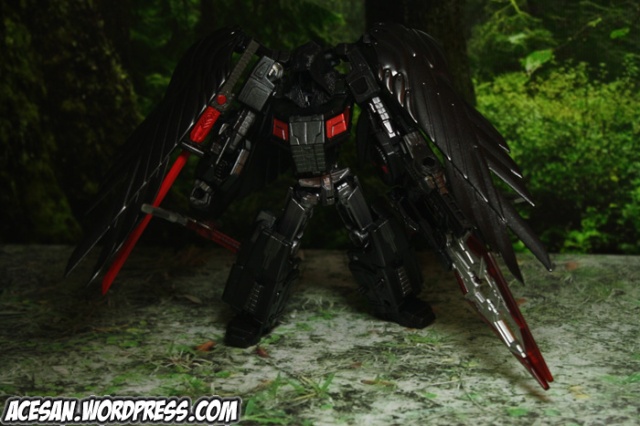 I think this is my most disappointing Transformer I have – Pregnant Prime! 😦

Finally! Here is the last bit of Part 1. If you missed the earlier parts, start at Part 1. Enjoy! 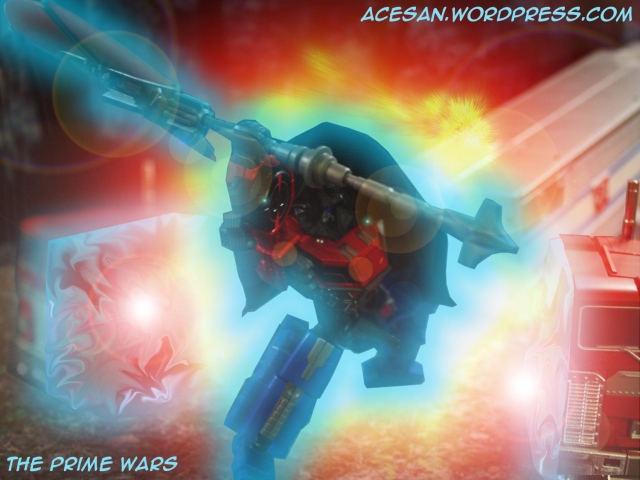